A new paper  in The De Morgan Gazette:

Abstract: I analyse students’ assessment of tutorial classes supplementing my lecture course and share some observations on what students like in mathematics tutorials. I hope my observations couldbe useful to my university colleagues around the world. However, this is not a proper sociologicalstudy (in particular, no statistics is used), just expression of my personal opinion.

This is about how the Elements of Euclid shed light, even on the most basic mathematical activity, which is counting. I have tried to assume no more in the reader than elementary-school knowledge of how whole numbers are added and multiplied.

If we turn the rows into columns, then we end up with thirteen rows of seven each; now the number of objects is 13 ⋅ 7. 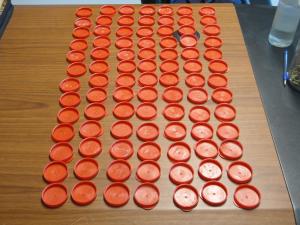 In the end, it doesn’t matter whether we have arranged the objects into rows or columns of thirteen. Either way, when we gather up the objects and count them, we must always get the same result. 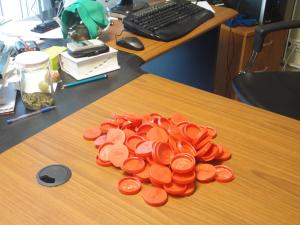 A heap of a hundred five bottle-caps.

Must we really? We believe from childhood that we must. As children, we learn to say certain words in a certain order: one, two, three, four, and so on. We learn to say these words as we move objects, one by one, from one pile to another. As we move the last object, the last word we say is supposed to be the number of objects in the original pile. We have now counted that pile. In the process, we have removed the pile; but if we count the new pile, we get the same number.

At least we think we do. Does anybody ever question this? If we do question it, and if we are familiar with some mathematical terminology, we may decide that, in technical terms, what we are asking is whether all linear orderings of the same finite set are isomorphic, or whether all one-to-one functions from the set to itself are also onto the set. We can prove that they are, in either case, by the method of mathematical induction. However, I suppose it takes some mathematical sophistication, not only to understand the terminology, but to believe that anything is accomplished by its use. If one is being asked to learn the method of mathematical induction for the first time, I doubt one will be impressed by its usefulness in establishing that, no matter how many times you count a bag of bottle-caps, you will always get the same number.

Meanwhile, there is a more fundamental question: what is a number in the first place? As it happens, for me, the best theoretical answer is that a number, a counting number, is a nonempty ordinal that neither contains a limit nor is itself a limit. An ordinal is a set with two properties: (1) it contains every member of each of its members, and (2) among the members of each of its nonempty subsets, there is one that has no other as a member. The empty set is an ordinal, and if a set called alpha is an ordinal, then so is the set that contains every member of alpha, along with alpha itself. This new set is the successor of alpha, and every ordinal that is neither the empty set nor a successor is a limit. Now, using the method given by von Neumann in 1923, I have defined counting numbers in simple terms, but in a complicated way that cannot be made sense of without some work. I am not going to do that work here, but I shall instead suggest that Euclid’s Elements offers an understanding of numbers that is unmatched, as far as I know, until the work of Dedekind in 1888. It some ways it may remain unmatched in the twenty-first century.

For Euclid, a number is a magnitude. A pile of bottle-caps might be called a magnitude; at least it has a weight, to which may be assigned a number. No matter how the bottle-caps are piled into the pan of a scale, we expect the same weight to be found; but it is hard to see how this observation can be made into a mathematical principle.

Euclid’s typical magnitudes—the ones seen in his diagrams—are bounded straight lines, or what we call line segments. What makes one of these a number is that some specified segment measures it, or goes into it evenly. This is the fundamental notion. The measuring segment is a unit, as is any other segment that is equal to it—equal in the sense of being congruent.

Dividing is not the same as measuring, but complementary. Dividing fifteen apples among five children is a different activity from measuring how many five-apple collections can be formed from fifteen apples. In the first case, each child gets three apples, in the second, three collections of apples are formed. A number of three things arises in each case, because multiplying three by five has the same result as multiplying five by three.

This is only a special case of Euclid’s general result, which is Proposition 16 of Book VII of the Elements:

If two numbers multiply one another,
their products will be equal to one another.

Actually the Greek is a bit wordier: If two numbers, multiplying one another, make some things, the products of them [that is, the original numbers] will be equal to one another. This multiplication is defined as follows:

A number is said to multiply a number
whenever,
however many units are in it,
so many times is the the number being multiplied laid down,
and something is produced.

Jonathan Crabtree argues strenuously that multiplying A by B does not mean adding A to itself B times, since this would result in a sum of B + 1 copies of A.

A product is the multiple of a multiplicand by a multiplier. Euclid proves that the roles of multiplicand and multiplier are interchangeable: in modern terms, multiplication is commutative. The proof uses a theory of proportion. In this theory, there are several ways to say the same thing:

I shall abbreviate these by writing

The meaning of this for Euclid may not be crystal clear to modern readers; but I think it can only mean that when the so-called Euclidean algorithm is applied to C and D, the algorithm has the same steps as when applied to A and B.

Applied to any two magnitudes, each step of the Euclidean algorithm has the following two parts:

Repeat as long as you can. There are three possibilities. In the simplest case, you will keep subtracting pieces equal to the same magnitude, until what is left of the other magnitude is equal to it. In this case, the one magnitude measures the other: alternatively, it is a part of the other. In case the algorithm never ends, then the original magnitudes must not have been numbers, but they were incommensurable. In the third case, you end up with a greatest common measure of the original two numbers, and each of these numbers is said to be parts of the other.

That is Euclid’s terminology. By the definition at the head of Book VII of the Elements, A : B :: C : D means A is the same part, or parts, or multiple of B that C is of D. Again, if we assume Euclid knows what he’s doing, this can only mean that, at each step of the Euclidean algorithm, the same magnitude (first or second, left or right) is greater, whether we start with A and B or C and D. Thus 8 : 6 :: 12 : 9, because

while in the same way

The repetition of the multipliers 4 and 3 here also ensures the proportion 8 : 6 :: 12 : 9, but only because 3 and 4 are prime to one another: they have no common measure, other than a unit. If we did not impose this condition on the multipliers, then the definition of proportion alone would not ensure the transitivity of sameness of ratios: the definition alone would not guarantee that ratios that were the same as the same ratio were the same as one another. But every kind of sameness has this property. Therefore, although Euclid does not quite spell it out, I contend that his definition of proportion of numbers has the meaning that I have given.

We can now describe Euclid’s proof of the commutativity of multiplication as follows. We accept that addition is commutative:

This means, if you pick up a rod, turn it end to end, and put it back down, it will still occupy the same distance. One might try to imagine a geometry in which this is not true; but we assume it is true. It follows then that, for any multiplier x,

where the ellipses represent the same number of missing terms in each case.

Thus, if we lay out seven sticks end to end, each thirteen units long, we reach the same length as if we lay out thirteen sticks, each seven units long. This is not obvious, even though, if you follow the rules of computation learned in school, you will find that 7 ⋅ 13 and 13 ⋅ 7 are equal. Euclid proves that this will be so, without any need for computation—which anyway will apply only to the particular example in question.