Skip to primary content
Skip to secondary content
Douglas Quadling, who was one of the four inspirational drivers behind the School Mathematics Project (SMP) in the 1960s and 70s, and a fine mathematician,  schoolmaster, and author, died on Wednesday 25th March 2015.
His funeral is in Emmanuel College Cambridge on Thursday 9 April at 2pm.

Anon: My comments are on a few themes which appear within the paper. They are stand-alone, selected on the basis of curiosity, and do not necessarily present a coherent over-arching argument.
On Games:
“…the winning strategies in such games were typically based on identifying the underlying algorithm instead of being “misled” by the story.”
This is very true, and I view it as a result of the human tendency to simplify or reduce puzzles to their essence.

YD: I would prefer to say the “pragmatically relevant essence”… Yet there is also another tendency that is unfortunately systematically suppressed by the system that I am criticising: The tendency to comprehend and delve into the essence of anything/everything.

END_OF_DOCUMENT_TOKEN_TO_BE_REPLACED

This Geobebra applet follows a theorem by Ludolph van Ceulen from 16th century: 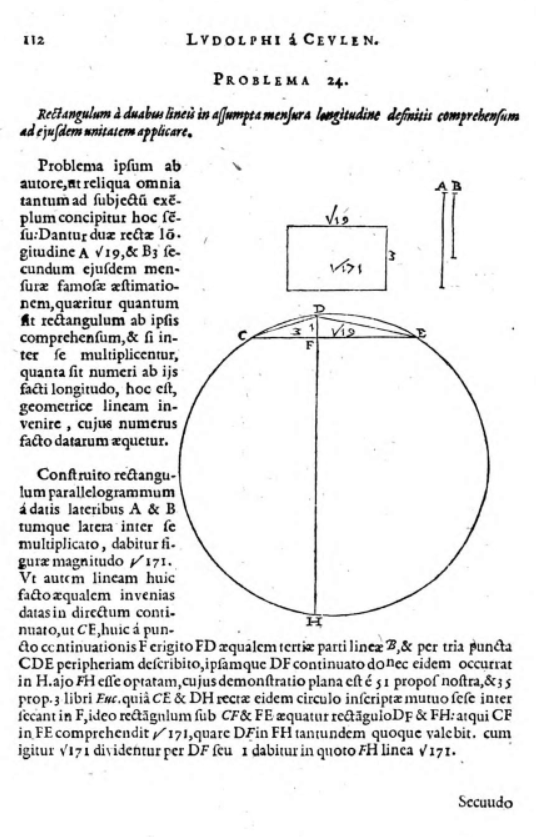 [To appear in the LMS Newsletter]

There are now an increasing number of movies where mathematics plays an important role. Usually we are let down by the parts featuring the maths because the makers of the film have little knowledge about our subject. So it is a real pleasure to review x+y a beautiful film where the mathematics is carefully done but not in a way that will put off a non-mathematical audience. The director is Morgan Matthews who also made the BBC4 documentary Beautiful Young Minds about the Mathematical Olympiad and the film is clearly based on this documentary. This documentary can be seen on Youtube.

The main character is Nathan. From the BBC synopsis

Preferring to hide in the safety of his own private world, Nathan struggles to connect with people, often pushing away those who want to be closest to him, including his mother, Julie. Without the ability to understand love or affection, Nathan finds the comfort and security he needs in numbers and mathematics.

Even though there are similarities between this film and the documentary, the main story line is totally fictitious. Near the beginning, Nathan, who has Asperger’s syndrome, is involved in a car crash which kills his father to whom he was very close. He is then mentored by his maths teacher Martin Humphreys, who when young had taken part in the Mathematics Olympiad. He was diagnosed with multiple sclerosis but also has other problems to do with self worth and soft drugs and ended up being a secondary school teacher.

Humphreys recognizes Nathan’s abilities and persuades him to enter for the Olympiad. He goes to the preliminaries in Taipei.

One of the scenes where there is actual maths is when Nathan is brought to the board to explain how to solve a problem. This involves playing cards which can be face up or face down.

Nathan’s solution is to model this with binary arithmetic involving 0s and 1s and he then turns the problem into an arithmetic one which is easy to solve.

In Taipei he meets Zhang Mei, a girl on the Chinese team. The film concentrates on two relationships. One between Nathan and Zhang Mei and the other between Martin Humphreys and Julie.

The scene moves from Taipei to Cambridge where the Maths Olympiad takes place.

There is real pathos in the final scenes. One where Nathan finally opens himself up to his Mother, and another when Nathan and Zhang Mei while travelling back from Cambridge by train see a rainbow and the viewer feels that their relationship will last. At last, Nathan feels and understands love and affection. Some critics have thought that this ending is too soapy, but if you see the documentary on which this film is based, the rainbow really was there!

One should also mention the excellent cast. Nathan was played by Asa Butterfield, Martin by Ralf Spall, Julie by Sally Hawkins and Zang Mei by Jo Yang. A lovely film where mathematics plays a central role.