Is this beginning of the end of the traditional model of mathematics education?

This advert for PhotoMath gone viral:  and enjoys an enthusiastic welcome.

Mathematical capabilities of PhotoMath, judging by the product website, are still relatively modest. However, if the scanning and OCR modules (“OCR” here refers to “Optical Character Recognition”, not to the well–known examination board). of PhotoMath are combined with the full version of Yuri Matiasevich‘s “Universal Math Solver“, it will solve at once any mathematical equation or inequality,  or evaluate any integral, or check convergence of any series appearing in the British school and undergraduate mathematics. Moreover, it will produce, at a level of detail that can be chosen by a user, a complete write-up of a solution, with all its cases, sub-cases, and necessary explanations (with slight Russian accent, but that can be easily fixed).

In short, smart phones can do exams better, and the system of mathematics education based on standard written examinations is dead. Perhaps, we have to wait a few years for a formal coroner’s report, but we cannot pretend that nothing has happened.

In my opinion, a system of mathematics education which focuses on deep understanding of mathematics and treats mathematics as a discipline and art of those aspects of formal reasoning which cannot be entrusted to a computer is feasible. But such alternative system cannot be set-up and developed quickly, it is expensive and raises a number of uncomfortable political issues. I can give an example of a relatively benign issue: in the new system, it is desirable to have oral examinations in place of written ones. But can you imagine all the complications that would follow?

PhotoMath gives a plenty of food for thought.

Heinz-Dieter Meyer and Katie Zahedi, and signatories – 5th May 2014

We write to you in your capacity as OECD’s director of the Programme of International Student Assessment (PISA). […]

Read the rest of the letter in the Global Policy journal.

I have been a teacher for many years now; in fact, we’re now rapidly approaching the point at which I’m thrice the age of my students, rather than merely twice. I teach 2 very different things. On the one hand (which I can write without violating the basic tenets of the Number Liberation Front, as I’m using ‘one’ not as a number but as an adjective, I suppose), I teach mathematics to undergraduate university students, and on the other hand, I am 1 of the instructors in the University aikido club. I’ve been thinking recently about the commonalities and differences between the 2 types of teaching.

There is an obvious difference between the 2. To practice aikido requires physical contact. Someone grabs me, or attempts a strike, and I need to do something rather quickly. (Or is it quite quickly? Having lived in 2 countries where the use of ‘quite’ and ‘rather’ is different, I am now very confused and can’t remember which is the current local usage.) The end of a good, active aikido session can be sweaty.   This physicality leads to a directness in teaching.  When I’m being thrown by a student, I have the opportunity to feel exactly what they’re doing, right and wrong, which I can then feed back to them immediately.

Mathematics, on the other hand, can be done in isolation. (And to follow a random train of memories, this brings to mind Ms Shearer, my 6th grade teacher, with whom we spent a session listening to Simon and Garfunkel’s I am a rock, I am an island, and discussing how people cannot exist in isolation, as they remain part of the cultural in which they grew up.)   Also, mathematics rarely involves physical combat.   Not never, mind you, just rarely.  In terms of teaching, though, mathematics teaching is a bit more at a distance than aikido teaching.  Part of this is that mathematics classes tend to significantly larger than the aikido classes I teach.   Also, a good, active mathematics class rarely ends in sweat.

Even so, there are for me some deep and significant similarities.   These are things that no doubt are similar to the teaching of many things, but hey, this is my meditation.  The similarity I would like to focus on here is the lead-a-horse-to-water phenomenon that is regularly, and sometimes almost brutally, brought home to me in both teaching fora.

In both aikido and mathematics, there are some basic, fundamental ideas that underlie everything that we do, and that I try to bring out and illustrate as much as I can through my teaching.  This is after all, in my mind at least, what a teacher should do.  I have spent  time studying how to do particular things, learning from my contemporaries and those who have gone before, and I can use the miracle of language to take what I’ve learned and provide my students with some short cuts, so that they can get farther along the path a bit faster than me.

In aikido, 1 of these basic, fundamental ideas is that at any moment in a technique, I should understand where my balance is and what is happening within both my own centre and my partner’s centre.  The way I like to try and embed this idea into my students’ brains is to have them go slowly through a technique, paying attention throughout.  But this requires that the student is willing to do the technique slowly, and alas not all of them are.  So I talk, I demonstrate, I cajole, but in the end, I cannot force.  Ultimately, I cannot teach anything.  All I can do is to provide guidance for my students on how they might learn and provide them with an environment within which they can learn.

In mathematics, the basic, fundamental idea on which I like to focus is that each statement, each assertion, needs to come from somewhere.  With each question, we have to start with things we know to be true and work out from there.  Part of an undergraduate mathematics education, and indeed mathematics education before university, is to provide students with a collection of facts, procedures and processes that we know to be true.  Mathematics does not come from nothing.  Mathematical facts do not spring full-grown from the head of Zeus.  Rather, mathematical facts are the product of accretion and accumulation (and this is where the sweat comes from).  We have just come to the end of the semester, and as in all previous years, I have the evidence that some of my students listened, and some didn’t.

So, what to do?  There is nothing to do besides persist.  Some students listen and some students don’t, but I have come to believe that it is these larger things, these fundamental ideas, that are by far the more important things that I teach, far beyond the individual techniques of aikido or the definitions, theorems and examples in mathematics.  And so we persist.  As Samuel Beckett once wrote, ‘Try again.  Fail again.  No matter.  Try again.  Fail again. Fail better.’

From Charles Walkden, University of Manchester:

`The Imitation Game‘ is a biopic of Alan Turing starring Benedict Cumberbatch in the lead role (also starring Keira Knightley, Charles Dance,…) and will be released in cinemas on Nov 14th.

The film’s distributors asked us to get involved in the publicity and promotion for the film by running a one-off on-line `Imitation Game Cryptography Competition‘, www.maths.manchester.ac.uk/cryptography_competition_the_imitation_game.

It’s free to enter and is open to everybody.  There are some great prizes for you to win: film posters signed by the cast, DVD bundles, soundtracks, etc,  The competition runs until 14th Nov.
Please can you spread the word to anyone and everyone (and feel free to take part yourself!).
PS:  The School’s annual `Alan Turing Cryptography Competition’ will run again from Jan 2015, with registration opening on 1st Dec.  Unlike the Imitation Game competition, this is only open to school children in Year 11 or below – but again please spread the word!
Andrew, Charles, Kees, Sebastian, Helen

This short report summarises the pending changes to national assessment at 4/5, 6/7, 10/11, 15/16 and 17/18.  It attempts to list the key concerns about the reforms and to describe the likely imminent calls for modifications.

It can also be downloaded as a word document here:
National Assessment Reform Where are we now 1 Sept 2014

If you have any questions you can contact the author.

Hi, I am Moby and I bring you the news about Natural Math. Send me your questions, comments, and stories of math adventures at moby@moebiusnoodles.com

Math coloring pages and other activities to try

BugFest is a big annual celebration of insects and crustaceans at the North Carolina Museum of Natural Sciences, attracting some 35,000 visitors to its hands-on learning centers – for example, to explore fractals in nature at our table. We miss you already, BugFest friends, and hope to see you again next year! Huge thanks go to the amazing kids who liked our activities so much that they taught them to others. The two most popular activities at the BugFest were insect-themed coloring pages and origami. 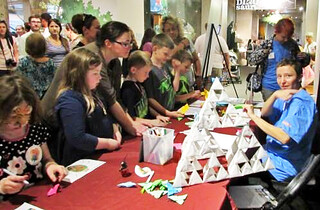 END_OF_DOCUMENT_TOKEN_TO_BE_REPLACED

As it happens with most viral stories in social media, the provenance of this picture (at one point published in chinaSMACK) is hard to trace: